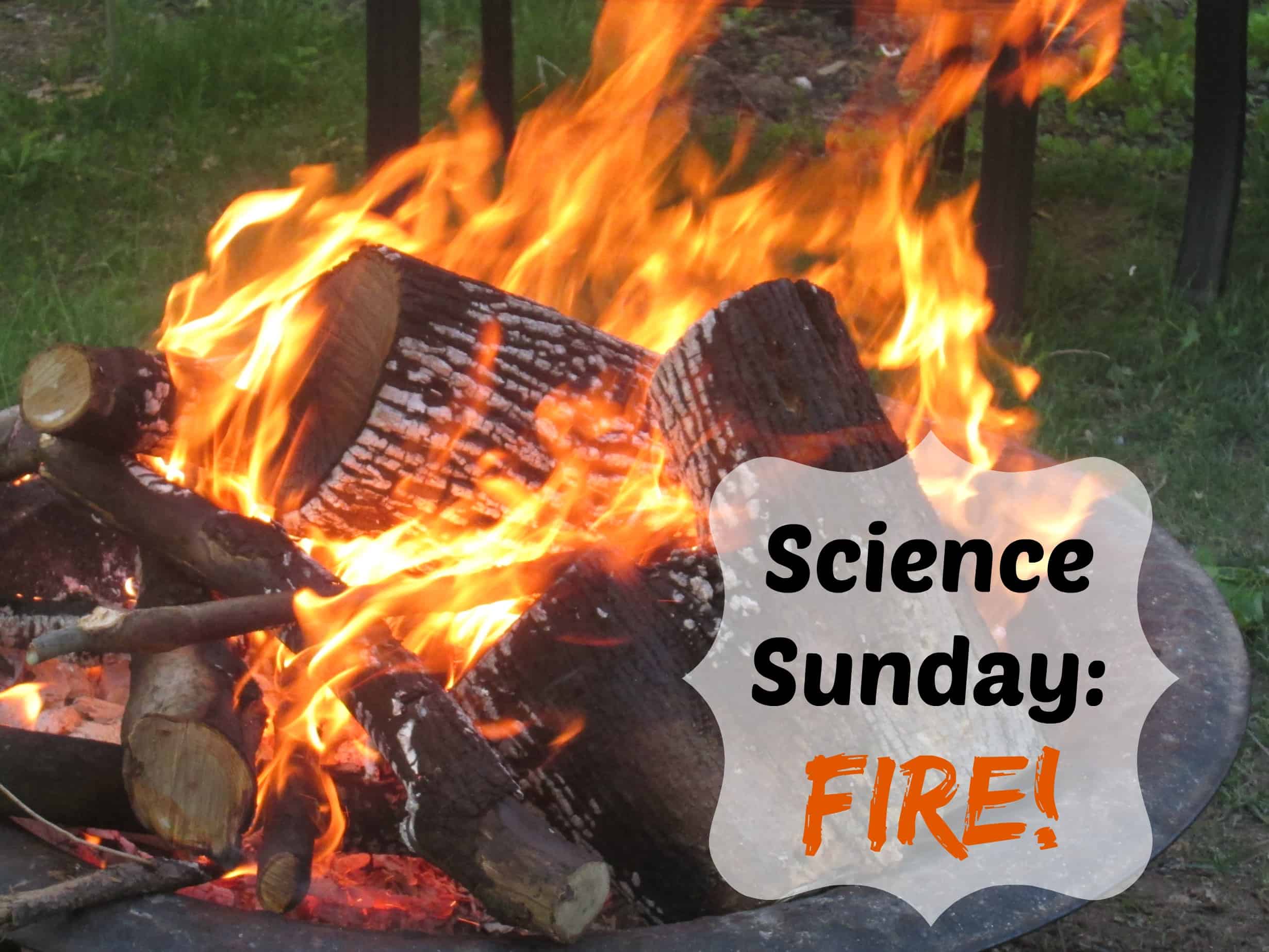 I have really enjoyed our unit on fire so far.  Some of our book review choices were very interesting, and who doesn’t like to have a backyard fire to relax at the end of the evening?  So now that we have seen a fire in action, lets learn a little bit about fire.  Since I am not a chemist, and the point of Science Sunday is to be able to teach our children a little something, I will try to be as basic as I can with the science of fire.

I think one of the most interesting things about fire is that it can be both extremely helpful or extremely harmful.  For instance, a controlled fire for cooking, heat, or light is helpful.  But an uncontrolled fire can harm individuals or their possessions very quickly.  I had never really taken the time to think about things in the natural world this way, but I think this will make for a good discussion with the kids!

Fire is not matter like much of the world around us.  Fire is a chemical reaction that produces heat and light.  Fire is created when oxygen combined with a fuel (such as wood) is combined with enough heat to cause a chain reaction.  This is referred to as the fire tetrahedron.

A fire does not consume every bit of its fuel.  In a wood fire, smoke is a volatile gas given off by the chemical reaction.  Char is carbon left over from the fire, and ash is composed of noncombustible minerals in the wood.

I definitely learned something about fire by researching this topic.  The Fire Tetrahedron may sound boring, but it sure does produce something beautiful!  Come back on Tuesday when we make fire starters for your next camp fire.

A nature lover busy making her own backyard brilliant!

link to How to Play Shadow Tag

Shadow Tag is a fun and easy outdoor game for kids of all ages. Plus, it provides learning opportunities! The rules of Shadow Tag are straightforward - the person who is “it” tries to...

Lately, after two visits to aquariums where jellies were prominent, and observing a jelly on the beach in Hilton Head, I've been fascinated with these ocean creatures!  Today, I'll share some fun...

Hello! I'm Sarah. A nature-loving mom who enjoys spending time in her backyard.

Backyard Brilliant is a participant in the Amazon Services LLC Associates Program, an affiliate advertising program designed to provide a means for sites to earn advertising fees by advertising and linking to Amazon.com. Backyard Brilliant also participates in affiliate programs with CJ, ShareASale, and other sites. We are compensated for referring traffic and business to these companies, at no additional cost to you.